In January 2017, I was observing M33 from a calm suburban parking lot. My batteries were running low after a couple hours and I decided to finish the session with a couple quick test shots of M106.

Take-home message was: “I want to revisit this galaxy with more exposure time, somewhere in April or May.”

Well, 3 years later I finally revisited M106. This time armed with better gear and a lot more experience. It’s really a fantastic galaxy. Large, bright, colorful and the background contains tons of other galaxies. On top of that, the core contains spectacular energetic jets, which I was able to enhance with my H-alpha filter.

André van der Hoeven and Mabula Haverkamp (the author of the popular astropixelprocessor software package (APP)) recently posted a collaborative image on the Dutch Astroforum.nl, where they were able to detect magnitude 22.5 galaxies. They used 27 hours of luminance data from light polluted backyards (SQM 19).

It was very intrigued by this and wanted to see how deep I could go with 6 hours of luminance data from my own suburban backyard, where light pollution is very similar.

The image below shows my inverted luminance with annotations from the SDSS R9 catalog. I used the data from the Sloan G-band filter, since it covers a good part of the visible spectrum (400 – 530 nm). Additionally, objects were filtered to include only galaxies instead of stars. The limiting magnitude of this image appears to be ~21.5, more than 1000 galaxies can be seen in the full field.

Exploring the distance of objects was also an interesting journey. I learned how to calculate simple cosmic distances using Hubble’s law. You can calculate the approximate distance to most galaxies in the NGC and PGC catalogs by using their redshift and the following formula:

Let’s illustrate this for the NGC and PGC galaxies in the image below. In case you want to try this out on your own data: I used SIMBAD to obtain the redshift measurements. 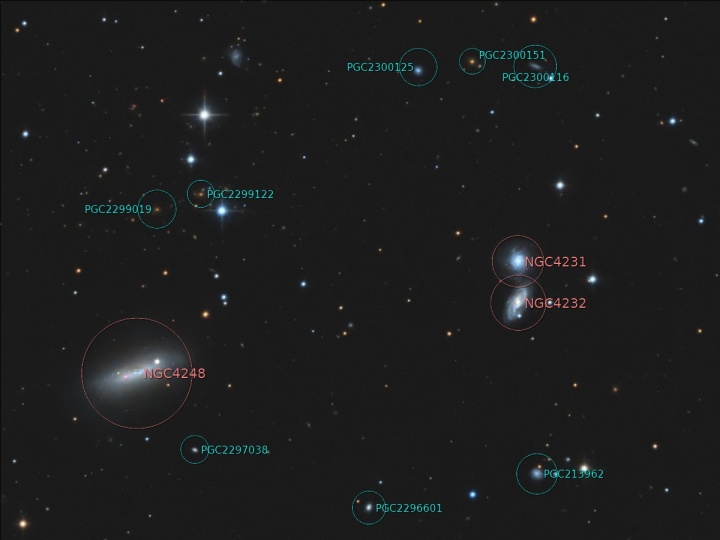 Finally, there’s the question: “what is the furthest object you can see in your photo?” To answer that, we have to look for objects with very high redshifts. Quasi-Stellar Objects (QSO), or more commonly known as quasars, are among the most distant objects we can see. They are often a hundred or even a thousand times brighter than a typical galaxy, but look like a dot or star in images due to their extreme distance.

So I went to VisieR and browsed the list of QSO databases. I downloaded Hewitt’s Revised and Updated Catalog of Quasi-stellar Objects (1993), which contains 24000 entries, and asked VisieR to calculate the J2000 coordinates of each object. Then I formatted the list and loaded it as a custom catalog into PixInsight’s annotation script.

My image contained 1 object from the Hewitt catalog. The catalog does not list any names, so I copied the coordinates and asked Simbad to look for know objects around these coordinates.

The result: I found a quasar named 7C 121446.70+472852.00 on the right side of the frame (click the image above for full size, the quasar is annotated in white text). It looks like a magnitude 19.5 star but it’s actually much, much further away. The redshift is 1.13 and according to the calculator below, this object lies 12 billion light years away! http://www.astro.ucla.edu/~wright/CosmoCalc.htmland

Hubble’s law becomes more complex for objects with redshifts >1. The fabric of space has been expanding while the quasar’s photons traveled through it, and the formula for distance calculation become quite complicated. There are even 4 different ways to express ‘distance’ at these scales. Cosmological distances are quite complicated and I’ve only barely scratched the surface trying to understand this deeply scientific topic.